Ask an expert why M193 at full velocity will reliably perforate a steel armor plate, and you’ll hear “speed kills” or a variation of that refrain.  In other words, it’s commonly assumed that M193 penetrates better simply because it is faster.

In fact, it can’t possibly be true. For one example, we know of a fairly standard 6.5mm-thick steel armor plate that has a V50 against the M855 of 3300 fps, but which has a V50 of only around 3000 fps against the M193.  What this means is that M193 at 3100 fps will more reliably penetrate that steel armor plate than M855 at 3300 fps.  Even if the steel-cored “penetrator” “semi-AP” round is traveling 200 fps faster than the old lead-cored M193, it is the latter which is more likely to penetrate that steel armor plate.

The table below is from Deutsche Edelstahlwerke (DEW), a supplier of steel armor plates to companies that build high-end armored cars.  DEW claims that a 5.9mm thickness of their very good steel is sufficient to reliably stop M855 at 3116 fps, yet they note that an 8.5mm thickness is required to reliably stop M193 at 3215 fps.  That’s roughly 45% more thickness, to stop a lighter round, with less energy, moving just 100fps faster.  At first glance, this makes no sense. 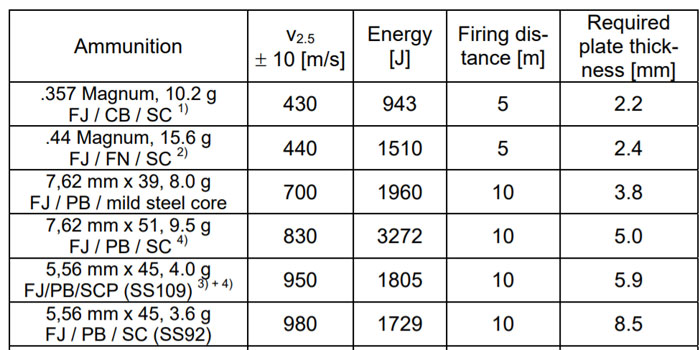 What’s clear is that it’s not velocity, it’s certainly not total kinetic energy, and that it can’t possibly be either or both of those things — there must be a qualitative difference in how the M193 and M855 interact with steel targets.  And indeed there is.

Take a look at the image below.  (A) is what happens when M855 hits a steel plate at muzzle velocity. 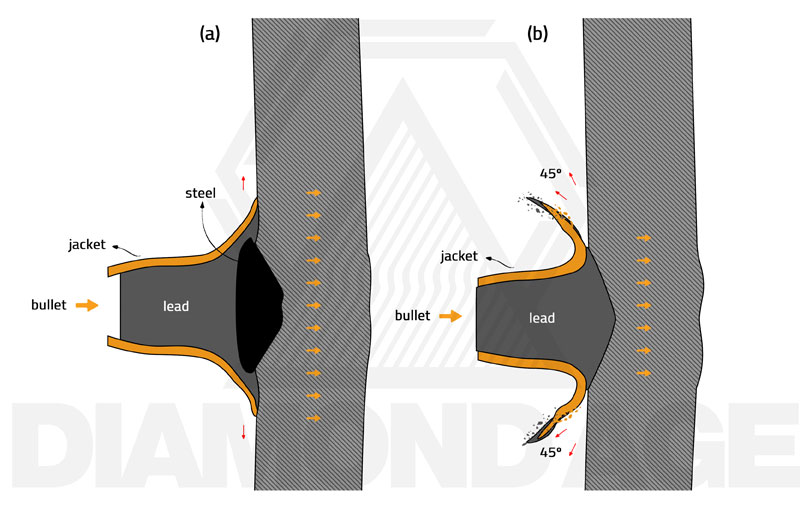 When M193 impacts a steel plate at high velocity, the entire projectile can be modeled like a high-density fluid.  In some respects it behaves like a high-pressure water-jet.  All of the projectile’s kinetic energy is dumped onto a relatively small surface area.  This typically results in plugging shear failure, which is why the hole in the steel plate will always be slightly larger than the projectile itself.

Some lead and jacket material will splash up and out — at a roughly 45° angle at first, and then following the rim of the crater formed upon impact.  This ablated material doesn’t interact very much with the steel armor target, has rather insubstantial mass, and typically doesn’t much reduce the kinetic energy load dumped upon the site of impact.  But if the steel plate is strong or thick enough to defeat M193, you’re going to get a very small crater and a lot of lead splash.

This was all discovered largely by modeling in LS-DYNA and similar ballistic simulation programs, but it has also been seen experimentally.

So there you have it.  M855 under-performs against steel plates because the projectile’s steel “penetrator” is decelerated upon contact, forcing the lead plug behind the “penetrator” to flow around it — increasing its contact area on the steel plate surface, and spreading out the projectile’s kinetic energy load.  M193, which is of monolithic all-lead core composition, doesn’t have that problem, and performs substantially better.  It stands to reason that an all-steel or all-copper projectile would also perform better than the M855.  Well, needless to say, there are implications here for projectile design as well as armor design.

Of course, we’re talking muzzle velocity.  At 300-500 yards out, M855 retains more armor penetration capability.  Famously, it was designed to penetrate thin steel helmets from long distances — which is something that the M193 had problems with.

And all of this is not to say that there are no steel plates that’ll stop M193.  RMA just released a steel armor plate that’s rated to M193 at up to 3250 fps.

A Short History of the Ballistic Steel Helmet Why steel helmets, and why now?