Most of the people who work in armor and munitions design are die-hard experimentalists, and for good reason: The best way to test an armor system is to hit it with live rounds and see what happens.

But, true though that may still be, modeling software has become increasingly useful — even quite shockingly useful — and it is beginning to change the way we design products.

Numerical and hydrocode ballistic impact models aren’t new — they have been in regular use since the 1960s, when they were first applied to ceramic armor systems by the pioneering LLNL team led by Mark Wilkins. Initially, these early efforts attained good accuracy in modeling ballistic impacts onto monolithic aluminum armor systems. 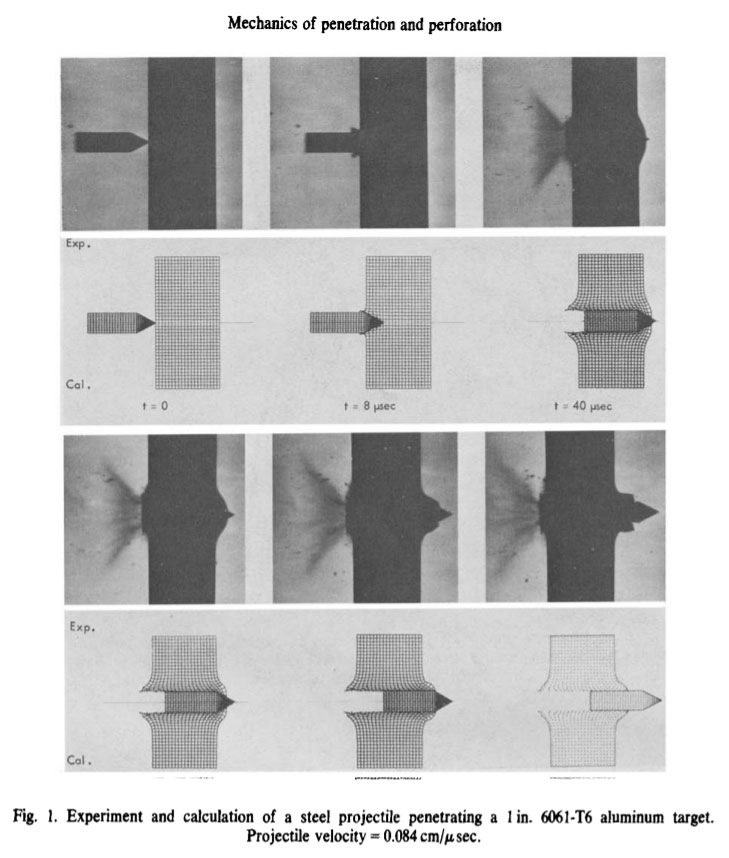 Their use was also broadened to include ceramic and ceramic-aluminum targets, which also led to simulations that matched experiments with reasonably good accuracy. 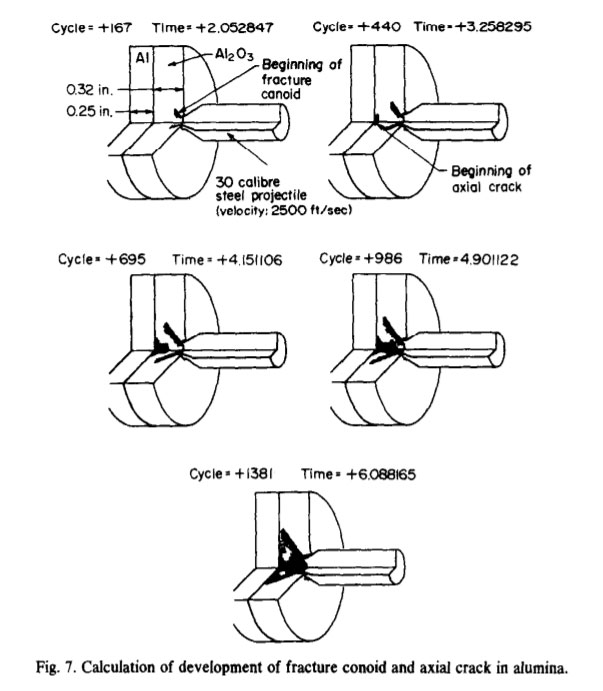 Wilkins’ modeling and analysis of ballistic impacts on ceramic-metal tiles were the first of their kind, and strongly influenced all subsequent work in the field.  Most of the ceramic models that Wilkins devised were enthusiastically taken up by other researchers, and, in some form, they remain in use today.

It is unfortunate that, in the 1960s and 70s, it was effectively impossible to model armor systems comprised of a ceramic strike face over a fiber-reinforced composite backing layer.  The computational means available at the time weren’t up to the task.  Progress was nevertheless made, as the Wilkins group did a lot of trailblazing empirical work with ceramic armor systems which utilized a fiberglass backing layer.  They ran hundreds if not thousands of real experiments, over a period of roughly five years.

Slow computers aren’t the only reason that modeling fiber-composite materials was impossible in those early days.  Another problem is that modeling the impact response of any material accurately requires a complete picture of that material’s static, dynamic, and structural mechanical properties.  For most metal alloys and ceramics, this is relatively trivial.

Ceramics are always brittle materials, and they typically behave in a well-understood and characteristic manner; the slight differences between, e.g., boron carbide and silicon carbide boils down to sonic velocity, hardness, density, Poisson’s ratio, fracture toughness, and a few other simple parameters.

Most of the aluminum and steel alloys in military service are simple and have been thoroughly characterized, so good and accurate parameter sets exist.  It’s rather more difficult to model less typical steel alloys, such as duplex steels — because, for instance, how and to what extent they exhibit strain-hardening is sometimes unknown, or poorly-known — but it can nevertheless be done, though sometimes one has to run real-world ballistic experiments alongside simulations to dial things in.

But fiber composites are another matter entirely.  There are two extreme approaches.

The first extreme: Model fiber composites as a bulk material with more-or-less accurate overall properties, and ignore the fine details.

The second extreme: Model fiber composites at a “high resolution,” as fine-scale heterogenous materials, and take into account the arrangement and individual properties of fibers, tows, and matrix.

The first extreme approach is called a “homogenized model.”  These are simple, and will generally give a fair picture of how a system is likely to perform in a penetration/no-penetration test — but won’t be as accurate as any other approach, and won’t give a realistic view of deformation behavior.

The second extreme approach should be ideal.  It gives much more accurate results, and should also provide an accurate picture of deformation upon impact. The anisotropic properties of fiber composite materials can be fully taken into account, dynamic properties such as fiber strain-hardening and between-fiber friction can show up in the simulations, and different resin systems can be compared in a fairly rigorous and exacting manner.  The trouble is that this approach can cost hundreds of thousands of dollars in compute resources — per experiment.  Modeling anything at this level of detail is computationally very expensive.  But this level of detail is required for good accuracy, isn’t it?

Well, here’s the good news: There are hybrid models that simplify the high-res details, without converting fiber composite materials into monolithic blocks.  These models have been considerably refined over the past five years, and it is now possible to easily, accurately, and inexpensively model fiber composite systems — and ceramic armor systems where ceramic tiles are supported by a fiber composite plate.

The below image, from the US ARL Report “Modeling Ballistic Response of Ultra-High-Molecular-Weight Polyethylene (UHMWPE)” by Zhang et al., illustrates this to some extent: 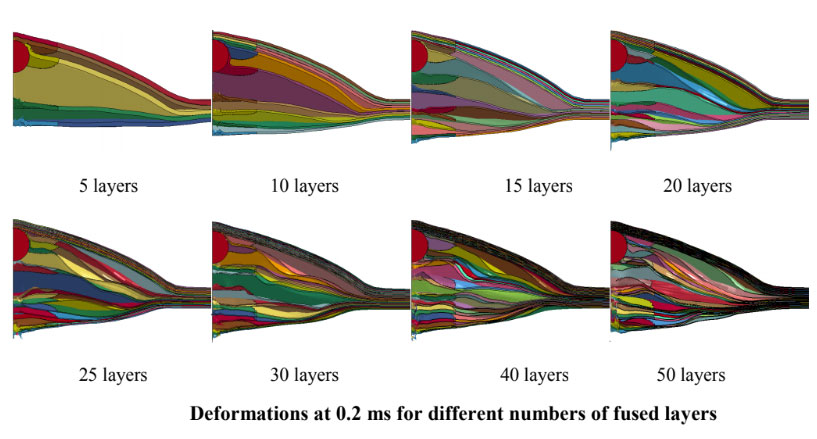 The age-old gap between the speed of homogenized models and the accuracy of high-resolution approaches has plagued academic, industrial, and military armor engineers for generations — but it has been bridged, with the advent and easy utilization of fast and accurate hybrid models.

These hybrid models enable the iteration of design parameters in a truly meaningful sense.  The design process of an armor plate, for instance, generally involves:

1) The quantification of the threat

Practically speaking, steps three and four are rarely very rigorous.  There is, traditionally, a fairly small palette of material choices, there are only a few ways in which those materials are commonly arranged, and material thicknesses are often tested empirically in fairly rough increments.

…But now, with good material models, fast computers, and software that allows for automation, it’s possible to simulate ballistic impacts on hundreds or thousands of different material and thickness configurations, in 0.1mm increments, until just the right system is found, for any purpose.  Empirical ballistic experiments can proceed from that point.  In the vast majority of cases, it will be found that the simulations exhibit very good (>90-95%) accuracy, and that the system selected by simulation, for any given threat or combination of threats, is an optimally or near-optimally designed system.

Diamond Age has excellent models for all materials — including very good hybrid models for fiber composites — and we typically have some runtime to spare on our computer systems running LS-DYNA.  If your firm is interested in working on some simulations or iterated design programs with us, please contact us at your convenience.

We’ve found that, in general, the non-linear, explicit, finite element code LS-DYNA — which we also use for metalforming and other such work — is the best software package for modeling ballistic impact events.  Most of the fiber-composite simulations previously-described were run with LS-DYNA.

As an aside, it should perhaps be mentioned that good models and good software will enable something very interesting in the near future: Armor systems designed by machine learning AI models, in an iterative process where thousands or tens of thousands of simulations are run in sequence.  AI models are already in-use — Diamond Age has developed and is testing an armor system with an AI-designed component… though, in this particular case, thousands of simulations were not involved.

Why fibers and fiber composites are strong, and why bulk materials usually aren’t. A Short History of the Ballistic Steel Helmet