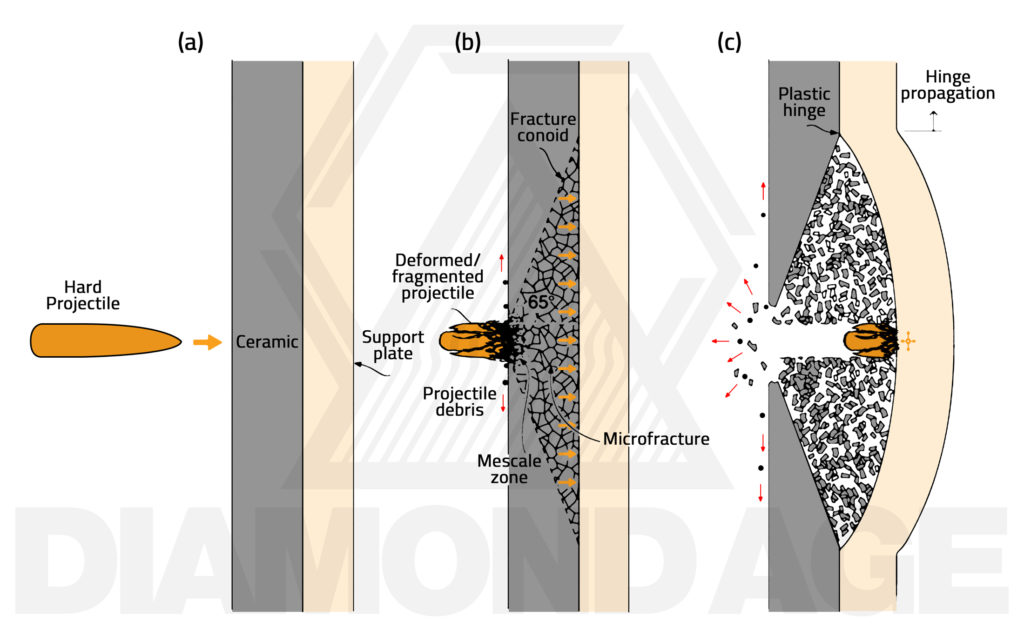 The first phase of penetration: Dwell.

(When an AP bullet with a hard core impacts a ceramic armor target, it is stopped for a moment, on the order of microseconds.  This is called “dwell.”)
– The Projectile: The nose of the AP core starts to break or erode as it comes into contact with the ceramic plate, which is always harder than the projectile, and which has a very high compressive strength.  The penetrator, momentarily arrested, begins lose velocity.  Temperatures begin to rise steeply in the area of impact.  Thus the kinetic energy of the penetrator is reduced due to the mass loss of its tip, the deceleration of its back part, and the conversion of some of that kinetic energy to heat.

– The Armor: Fractures immediately begin appearing in the ceramic plate.  They form in a characteristic inverted cone pattern, which has aptly been named the “fracture conoid.”  This conoid typically has a base diameter of approximately two to three projectile diameters from the center of impact, and a semi-angle of 60-70°.  (68° is often used for modeling purposes.)

– The Projectile:  A tensile stress wave is reflected back into the projectile from the armor surface.  This can further disrupt and fracture the projectile, or shock an unfractured projectile into fracture.

– The Armor:  A shear wave propagates axially through the armor plate.  The backing plate — these days, typically made of a composite material such as Dyneema or Spectra — is compressed by the fracture conoid and starts to deform.  This relieves pressure at the interface between the ceramic and the backing material, and also absorbs energy, as it coverts some of the projectile’s kinetic energy into plastic deformation and delamination.

The third phase:  Defeat or penetration

– The Armor: All of the ceramic material within the area of the fracture conoid has broken up, and now consists of fine or granular particles.  Large fractures propagate axially through the ceramic plate.

– The Projectile: If the AP core hasn’t been reduced to fragments, it penetrates the broken remains of the fracture conoid as a rigid body, albeit with significantly reduced energy.  It is then either stopped by the buckled backing layer, or it penetrates the plate entirely.

At impact velocities below 400 m/s, and especially below 250 m/s, the overall structural characteristics of the target are the primary factor; in other words, the local zone is much larger, and the plate is consequentially stronger.  It’s an unusual ceramic armor system that would fail at such velocities.

At velocities above 2000 m/s, the pressures induced by the impact event are extreme, and the penetrator and the armor can be modeled hydrodynamically — that is, as fluids.  This is beyond the scope of this short body-armor-focused overview, but is of paramount importance for heavy armored vehicle designers.  Hydrodynamic simulations are indeed the tank armor designer’s bread and butter, as shaped-charge jets are also best modeled as fluids.

At hyper-velocities, from around 7000 to over 12000 m/s, impact energies are so extreme and explosive that the penetrator and the armor are vaporized, wholly or partially, as soon as contact is made.

…Bullets don’t travel that fast, but micrometeroids regularly clock in at 8000 m/s or more, so satellites and spacecraft which require armored shells are designed with a thin exterior “bumper” which disrupts and vaporizes the micrometeroid, followed by a large airgap, and then a layer of structural armor.  The bumper is typically made of a light alloy — hardness per se doesn’t seem to be important at these velocities.  The structural armor is comprised of familiar materials: Ceramic and aramid fabrics.

Even at 250m/s, ballistic events are fast.  At 800m/s, all three phases of penetration would last mere microseconds.